Rather excitingly, at the end of last month, Ellie Harrison, Countryfile presenter, visited Quarry Bank to film for an episode of the programme, which will air this Sunday (8 March).

As it is National Apprentice Week from 9-13 March, she chatted to Quarry Bank’s Clare Brown (Machine Interpretation Supervisor) and discovered what life was like for apprentices working at the Mill. Clare tells me she even had Ellie scavenging on the floor looking for cotton, like an apprentice.

Ellie also took time to speak to Tony Williamson, a former Quarry Bank Building and Estate Apprentice, who has been working on the recent repairs to the Bell and Clock Tower. If you have visited Quarry Bank since October you will probably have noticed that the Tower has been clad in scaffolding, whilst our Estate Buildings Team assessed the state of the timbers supporting the Tower dome, the structure of the bell, and the clock face and set about making repairs.

The Tower has now been brought back to life by Tony and Jerry Veale, Quarry Bank’s Buildings Supervisor, with the help of a team of contractors. The ivy-covered Mill in the picture below shows what the Tower would have looked in 1901.

I spoke to Tim Marshall, Regional Buildings Surveyor, who filled me in on the progress of the Tower. Tim explained that the lower bell (the one that would have been rung to call the apprentices to work), was taken by himself to John Taylor & Co., The Loughborough Bell Foundry, pictured below, to be repaired. 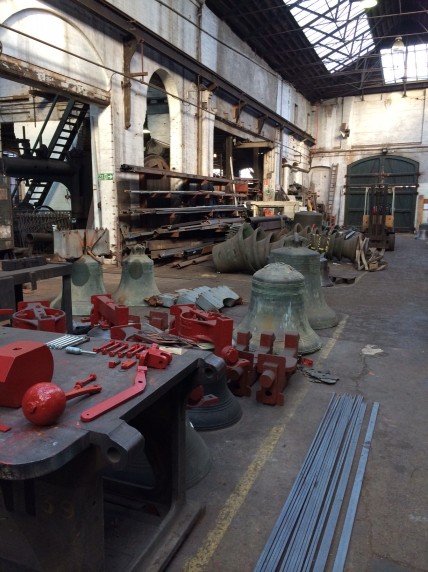 It was also discovered that the top bell is a John Taylor bell, dating back to 1895. It was commissioned for a Church in Newport, South Wales, but was returned after it was found too small, before being sent to a company call Joyce’s, who sold it to the Gregs. The bell was installed in 1900 in memory of Arthur Greg (below), who sadly died of pneumonia and pleurisy in 1899. He was the son of Robert Hyde Greg and managed the mill in Eagley, Bolton.

On a visit to Quarry Bank you might well have noticed that the Tower is in fact wonky. Look out for this in the episode on Sunday if you haven’t noticed it before. Tim emphasised the importance of maintaining, rather than correcting, the Tower’s unique slant, so as to keep the character of the property. That said, it was vital that the structure be stabilised and so the stone work round the clock face was replaced by Stone Mason, Neil Andrews and Jerry and Tony took care of the joinery. You can see the transformation their craft has made in pictures below.

Now it was time for the finishing touches. In the picture below, Jerry stands beside the brand new clock face. The face was replaced, as the existing face would have suffered damage if the paint had been stripped. Contractors painted the clock and no detail was spared, as they even used gold leaf for the numerals and clock hands.

Of course, during restoration projects like this, it’s never a case of out with the old, in with the new. Ally Tsilika, Quarry Bank’s Archives and Collections Officer, talks to me about the new acquisitions in the Quarry Bank collection since the restoration, explaining:

We have acquired the clock face, which may be the original. It was in very poor condition so it was decided to remove the original and keep it in the stores for preservation. The same was decided for the finial, which was rotten and large chunks missing. It was more appropriate to replace them and have new ones created rather than try to conserve the old ones, which can be used as references for future work too. We also acquired the clapper for the bell. 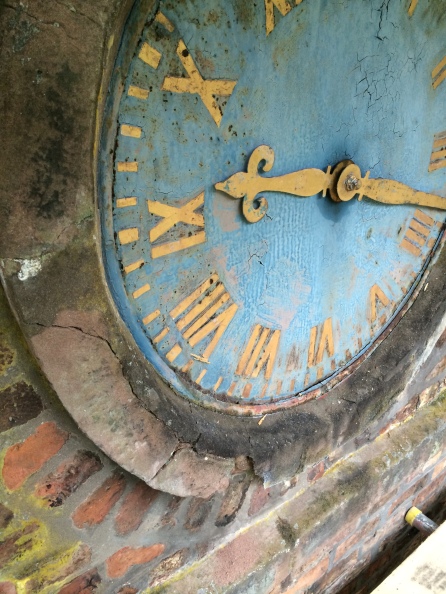 You can see the stark contrast between the old clock face and the new, but it is a wonderful thought that we still have the original safely preserved. The ball finial is pictured below and it is clear how badly it needed attention. Back in January, Josh, Collections and Archives Intern, was having fun adding such an unusual object to the collection.

Watch Clare and Tony in this Sunday’s (8 March) episode of Countryfile, at 7pm on BBC1. The scaffolding that you will see in the episode has now been taken down, so remember to look up to the newly refreshed Clock Tower on your next visit to Quarry Bank and listen out for the chime on the hour once more.