Last week Laura left Quarry Bank and we wish her great success in her new ventures. My name is Kate and I’m the Visitor Experience Officer here, I’ll be carrying on Laura’s work and sending out the blog with the help of Sophie Kembrey our Visitor Experience Intern.

Our brand new exhibition ‘Drawn Out Of Love’ has now opened and explores the lives and works of artists and spouses Barbara Greg and Norman Janes.

Barbara, born in 1900, was the daughter of Henry Philips Greg, who owned and ran Albert Mill, at Reddish, part of the Greg family’s business empire. She was the great-great-granddaughter of Samuel Greg.

Barbara grew up in Styal, and at the age of 19 was allowed to leave home to pursue her dream of becoming a professional artist, enrolling at the Slade School of Fine Art, and subsequently attending the Westminster School of Art and the Central School of Art. It was unusual for Edwardian parents to allow their daughters such freedom, but the Greg family had always encouraged liberal thought and self-improvement. Without the support from her family it would have been almost impossible for Barbara to forge her way as a professional artist.

It was whilst at the Slade that she met her future husband, Norman Janes. Norman was born in 1892, in Egham, Surrey, and came from a less wealthy background than Barbara. At 17 he joined the art school of the Regent St. Polytechnic and then, after five years in the army, which came to an end following a wound whilst on active service, he enrolled at the Slade. In his autobiography Norman recalls:

“I went to the Slade and survived the ordeal of an interview with the grim Tonks, who sniffed at my drawings but admitted me. (Next day he took me to one side and gave me a demonstration of what he meant by drawing)”.

The Professor of drawing, Henry Tonks, thought of as the ‘high priest’ of ‘pure drawing’, certainly seems to be a force to be reckoned with. Norman seems not to have been deterred however and returned to the Slade some years later, only this time as a teacher. I’m sure he proved to be a much kinder interviewer than the formidable Tonks.

Barbara’s letter to Norman, written from Styal, offers an endearing portrayal of their growing love:

“Do you remember at the Slade picnic going to sleep with your head on my lap and me combing your hair – I often think of you like that”.

Despite Norman’s different social background and financial instability, the Greg’s treated him as one of their own. Henry Philips Greg (Barbara’s father) was a so-called ‘big-wheel’ on the Manchester art scene and was Treasurer of the Whitworth art gallery. Barbara’s parents actively supported Norman in his chosen career, buying him his own printing press, even before the couple were married.

There is a hint that Norman may have felt some discomfort at their generosity. Barbara drew a picture of Norman using the press in one of her letters, in which she wrote to him:

“You must not think of offering to pay part of the press (sweet as it is of you) it is a Christmas present from my people (her family) – the price does not worry them at all they wanted to give you a good press”.

Barbara and Norman were eventually married in 1925. Barbara no longer lived the privileged lifestyle that she had grown up in and had to adjust to running a less affluent household in London, a willing, although perhaps difficult sacrifice.

They moved to Hampstead Heath and were happy living in an artistic community, where they went on to have three children, Julia, Michael and Marian. Norman supported the family further through his teaching.

In pursuing their chosen careers, they accepted the financial insecurities that would be the consequence of this decision. Barbara resolves:

“It will be mighty hard work but I shall like it”.

They supported each other in their work and would give the other pieces to review and critique. Barbara wrote to Norman in 1924, before they were married, lovingly explaining:

“I do not think I should be doing what I am now if it had not been for the encouragement you gave me at times when my work seemed no good at all and as though nothing would ever come of it. You have been the making of me in more ways than one”.

Such devotion is again shown by Barbara, in a letter to Norman, in which she drew the couple reuniting at Euston station in London – you can see the hastily drawn love note below. 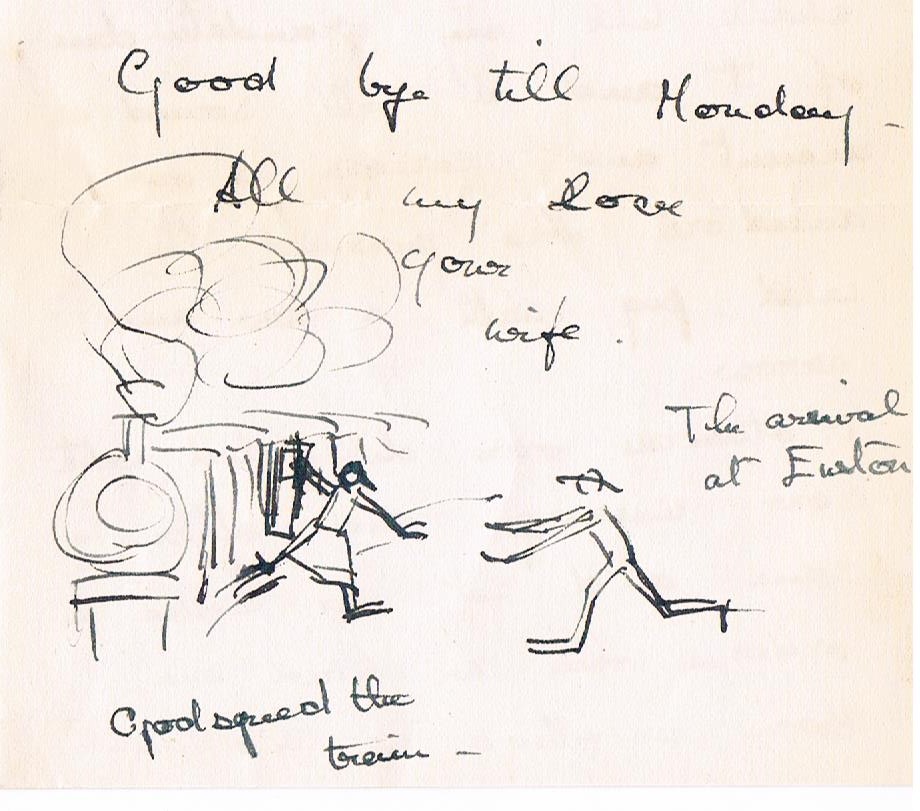 As well as drawing inspiration from each other, Barbara and Norman looked to nature, industry and their three children. Barbara, in particular, used nature as a source of inspiration, and in 1949 she received the most important commission of her life from Ian Niall, to produce the wood engravings that would illustrate his new book The Poacher’s Handbook. The book was so successful, and Barbara’s work so admired by Ian, that he commissioned her to illustrate his next two books, Fresh Woods and Pastures New.

The couple’s love of nature can be seen in the last line of one of Norman’s letters:

“I love you, little lady mine, and kiss you a long goodnight. Your Faun”.

With plenty more beautiful etchings and sketches to see, ‘Drawn Out Of Love’, on display at Quarry Bank until 19 April, explores in more detail the lives of Barbara and Norman, a couple united by their love of art.

With kind thanks to the Janes family for loaning the artwork, and for the images used in this blog.